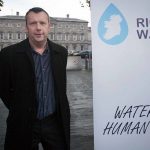 Right2Water Donegal are to hold a public meeting in Letterkenny tonight.

The meeting will be addressed by national co-ordinator Brendan Ogle.

The meeting will be held at the Mount Errigal Hotel Letterkenny at 8pm.

Brendan Ogle launched the Right2Water campaign in August 2014 as a representative of the Unite Trade Union.

Ahead of the meeting he says Right2Water will be looking at endorsing candidates in a General Election............