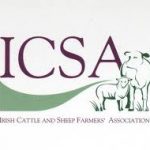 The ICSA says the roundtable beef talks are not achieving their goals.

The talks were initiated last year after protests outside a number of beef factories.

The association says there's been too much slippage on the commitments given already, and no guarantees are being received about quality assurance and price.