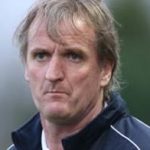 In the EA Sports cup on Monday night, Finn Harps lost to Galway Utd 3-2 in the first round at Eamonn Deacy Park.

The Premier Division side were 2-0 up at the break before Harps came into the game  in the second half with goals from Brian McGroary and Keith Cowan.

Harps Manager Ollie Horgan says their first half performance cost them the game.