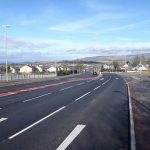 Police in Derry have completed a second search of a stretch of the Madam’s Bank Road after fears were raised last night of a bomb being placed in the vicinity.

Chief Inspector Andy Lemon, the area’s Operations Manager, said based on a limited amount of information that an explosive device had been left in the area, police carried out searches last night with the assistance of an explosives dog and this again morning. In both cases, nothing was found.

He concluded police would continue to urge residents and motorists to be vigilant, and if they notice anything suspicious, not to touch it but to phone police immediately.