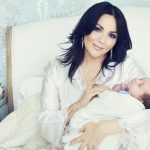 Martine McCutcheon and her husband Jack McManus have introduced their first son Rafferty in an exclusive interview and photo shoot with Hello! magazine.

The 38-year-old actress told Hello! that, after a struggle to conceive Rafferty, she has never been happier.
She said: “I used to think, when I heard people say having a child was their most life-changing moment, that they were just saying that because it was the expected thing to say.

“Now I so get it. I have never been so in love, so content and so full of happiness in my life. My mum always said to me that it is a love like no other, and it’s absolutely true.
“This baby boy is the love of our lives and I think the fact this didn’t happen easily for us and we faced challenges along the way has made him even more precious.”

Martine also discussed Rafferty’s dramatic arrival, which saw him moved into the special care unit for two nights with a lung condition.

The former EastEnders star told Hello!: “Basically, his lungs were filled with fluid, but we were told that it wasn’t anything to panic about and that he was being taken to the special care baby unit to be monitored.

“I was aching for that skin-on-skin contact and to hold my baby and bond with him.

“(But) when we went to see Rafferty in the incubator, he was already trying to lift his head and I thought, ‘you’re going to be just fine, little man’.”