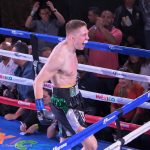 Jason Quigley has extended his professional record to 4-0.

The Donegal fighter stopped Lanny Dardar with a knockout in the first round of their bout on the LA Fight Club card at the Belasco Theatre on Friday Night.

Quigley was once again impressive from the first bell and had Dardar on the deck twice before the referee stopped it.

All four of Jason's challengers have all been stopped within the distance.

Speaking afterward Jason said "My strategy was to take my time, that really didn't happen because as I landed a few shots I saw they hurt him and I had to take him out as soon as I could".