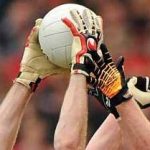 Tyrone manager Mickey Harte has named an unchanged team ahead of this Saturday's Allianz National League clash with Dublin at Croke Park.

Harte has retained the same side that started last weekend's draw against Derry at Healy Park.

Team captain Sean Cavanagh will continue at full-forward while defenders Tiernan McCann, Mattie Donnelly and Barry Tierney make up the half forward line.

Paddy McNeice is included in a match day squad for the first time this season having returned from injury.

The Derry team to play Mayo on Sunday shows two changes from that which started in the draw with Tyrone.

Aidan McAlynn comes in for the injured Barry McGoldrick and captain Mark Lynch returns from a one-match ban, replacing Eoin Bradley who misses the game due to a pre-arranged family holiday.