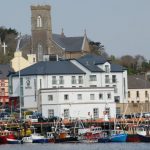 Government grants of over half a million euro have been announced for two seafood processing companies in Killybegs as part of a 2.7 million euro national initiative.

This will generate a total investment of almost 4 million euro in the Seafood Industry in Killybegs.

Junior Minister Joe Mc Hugh says this reflects a growing confidence in the local economy, and the extent to which Killybegs is still a leader in the value added sector of the seafood industry...........