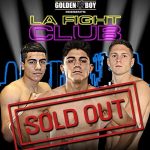 Jason Quigley will look to extend his unbeaten professional record on Friday night in Los Angeles.

Having won his first three pro fights, The Finn Valley ace takes on Lanny Dardar on the sold out L.A Fight Club card at The Belasco Theatre.

Speaking ahead of the fight boxing great Oscar De La Hoya said "Jason Quigley is going to be one of the highlights in the ring at the sold-out LA Fight Club premiere, Golden Boy Promotions believes Jason Quigley has what it takes to be a champion, and that's why we signed him. I'm proud of what he's accomplished, and I know he will make the fans back home in Ballybofey proud once again after Friday's fight."

It will be a four round fight for Quigley who has to date seen off his first three challengers within the distance.

Speaking with Michael Montero Boxing, Jason is looking to make his mark in L.A.