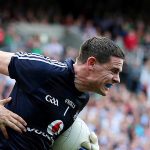 Stephen Cluxton has returned between the posts after Jim Gavin's side struggled with their kick-out strategy against Kerry last time out.

Paddy Andrews and Bernard Brogan will also make their first competitive starts of the season, while Eoin Culligan, Nicky Devereux and Emmett O'Conghaile are also recalled.