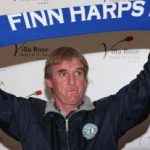 With the comings and goings all finalised and the pre-season work all complete, Ollie Horgan and his Finn Harps side will be looking forward to the serious stuff getting underway this weekend as they open the season with a trip to Tolka Park on Friday night to face First Division title favourites Shelbourne.

Harps endured a disappointing end to last season with defeats in five of their final six league games. Ironically, their only victory in that run of games came against Friday’s opponents when they ended the Dublin sides’ fading automatic promotion hopes with a 3-2 victory at Finn Park.

Harps have kept much of the same squad as they had last season, but there have been a few comings and goings as would be expected as a new season dawns.

“We have made a number of changes to our squad since last year with six players in and seven out,” said Horgan. “Caoimhin Bonner and Sean McCarron went to Cliftonville, Conor Wynn signed for Galway, Jordan Loftus is back with Castlebar, Carol Tiofack is with a side in Australia, Shaun Patton went to Derry and Pat McCann is playing football in Spain.

“All those lads will be a loss to us but we have replaced them with Ciaran Gallagher, Raymond Foy, Mathew Crossan and Rory Keating who have played with us before as well as Tony McNamee and Regan Donelon,” said Horgan.

Harps had a decent run of results in pre-season, with their only loss coming against Sligo Rovers at the Showground a couple of weeks ago. Most of the games were against Premier Division opposition including Galway United, Cork City, Irish League side Coleraine and Derry City. The match against the latter was the final game of pre-season last week but was abandoned at half-time with Harps leading 1-0.

“Pre-season has gone ok,” said Horgan. “We lost a session at the start due to snow and probably the only disappointment was the lack of time training/playing on grass pitches due to weather and also only getting to play a half in Derry at the weekend due to rain. Sligo gave us a lesson couple of weeks ago with their quality of play and also quality of work rate.”

Now entering his second season in charge at the club, Horgan said that his aim is to make improvements on last season’s league form which seen them finish in fifth place but way off the points tally of the four clubs ahead of them.

“Obviously we hope to improve on last year but that is easier said than done,” said the Harps boss.

“The likes of Cobh and Waterford have seriously improved, Shelbourne finished twenty points ahead of us last year and Wexford 14 points. Athlone and UCD have good sides with experience down the middle of their teams. We will see how the first series of games go and see where we are then.”

So, Friday night will see Harps kick-off their 47th consecutive season of League of Ireland football with a trip that is actually one of their closest away games this season – despite the home grounds of the two clubs being 140 miles apart (Athlone is Harps’ shortest away league game this season which is a journey that is only 10 miles shorter than Friday’s).

It doesn't get much tougher than Shelbourne away to start with but we have to go there sometime,” said Horgan as he looked ahead to the trip to Tolka. “They finished twenty points ahead of us last year so it will be a big task to get anything out of there.

“Shelbourne always play good football and have added to their squad since last year with the addition of experienced players in Philip Hughes, Daire Doyle and Craig Walsh as well as very talented younger players in Evan Ozam and Sean Heaney.”

Gareth Harkin and Ciaran Coll sit the match out through suspensions carried over from last season, while Packie Mailey is still a few weeks away from full fitness and misses out.

After the trip to Dublin, Harps are back on the road again on Monday night when they make the trip to Galway United in the first round of this season’s EA Sports League Cup (kick-off 7.45pm / Eamonn Deacy Terryland Park).