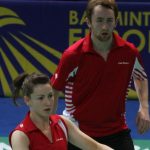 At this week’s All English Championships Chloe and Sam Magee bowed out at the last 32 round in Birmingham.

The Raphoe pair couldn’t repeat the performance which saw them beat the world number 10 pairing of Michael Fuchs and Birgit Michels at last week’s German Open.

This week they lost to the world number 4 ranked players from Indonesia as they dominated the match winning in two games.

In the singles Chloe also lost in the last 32 round going down against the current World Champion Carolina Marin from Spain in three games 21-15 14-21 21-11.

The Swiss Open is up next for the Donegal players.