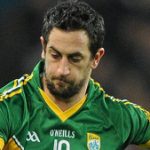 At the age of 35 Paul Galvin is back with Kerry.

13 months after he retired from inter county football it was confirmed by the Kingdom last night that he is part of the squad once again.

It remains unclear if he'll be involved for Sundays meeting with Cork.

The four-time All-Ireland winner has now returned to add further firepower and experience to Éamonn Fitzmaurice's panel as they look to defend Sam Maguire later this year.

Given the return of Tommy Walsh from Australia and the expected return to fitness of Colm Cooper within the upcoming weeks, Galvin could also be used in a more defensive role on his return the Kerry set-up.