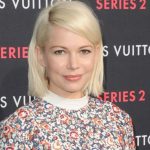 Michelle Williams has revealed how work and motherhood often leave her exhausted.

The Oscar-nominated actress, who starred in movies such as My Week With Marilyn, Brokeback Mountain and Blue Valentine, admitted that juggling being a parent to nine-year-old daughter Matilda Rose with her career tires her out – to the point where she’ll sneak a nap at events.

“I feel like most of my life, I’m trying to do two things at once, both to the best of my abilities. So that leaves me feeling pretty exhausted,” she told Elle UK.

Michelle, who graces the front cover of Elle UK’s April issue in several Louis Vuitton outfits, continued: “I’m the person who falls asleep all the time. You invite me over for dinner or to a party, and there’s a whole scrapbook of pictures of me napping. I’ve even been given a nickname because of my snoring.”

The 34-year-old star is currently enjoying a break from work. She’ll next be seen in Second World War drama Suite Francaise alongside Kristin Scott Thomas, Ruth Wilson and Margot Robbie.

“I feel like I’m so good at raising a kid when I’m not working. I don’t forget anything. I’ve got everything covered. It’s a real luxury to have a moment when I’m not scrambling,” she said.