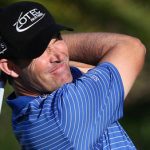 Padraig Harrington is going to this year's Masters.

The three-time Major winner has claimed a dramatic victory at the Honda Classic.

The 42-year-old beat Daniel Berger on the second hole of their head-to-head play-off at Palm Beach after the American rookie found the water with his tee-shot.

The win means that Harrington has taken-home the 1.1 million dollar first prize and has also earned a late inclusion to the field for this year's Masters.

The Dubliner believes that he's getting back to the kind of form that saw him claim three major titles...