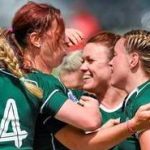 The IRFU has officially announced it's bid to host the women's World cup in 2017 at venues in Dublin and Belfast.

The stadia includes University College Dublin before moving to Belfast for semi-finals and finals at Queens University Sport and the newly developed Kingspan Stadium.

Last year the women's team reached the semi finals in France where they were beaten by England however they earned a measure of revenge for that loss last Friday beating England in the Six Nations.

Donegal’s Larissa Muldoon and Nora Stapleton were part of the Irish team which reach the semi’s last year.