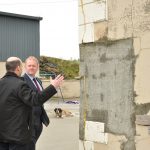 Housing Minister Paudie Coffey has met with the Mica Action Group in Inishowen during a visit to Donegal at the weekend. Mr Coffey was in Donegal to address the Colmcille Winter School.

It follows a public meeting attended by hundreds of people in November, highlighting the the issue of defective blocks which people say are undermining the integrity of their homes.

The Mica Action Group told the minister that government intervention is necessary, and ultmately, they want to see a redress scheme to help affected homeowners along the lines of the pyrite scheme which is currently being finalised.

Philip Mc Daid was one of the group who met with Minister Coffey.........