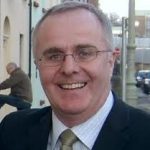 Added personal will be travelling with gritter drivers in Derry over the next couple of weeks to give an added sense of security.

The measure comes after attempts were made to hijack a lorry in the city on Friday morning.

A second person will be apoointed to each lorry, to provide vigilance and support to the driver.

Speaking to Highland Radio News, Sinn Féin Foyle MLA Raymond McCartney is welcoming the move but is hoping it will only need to be on a short- term basis..........

Meanwhile, NIE have moved back into the Rinmore Drive area to complete maintenance and repair works which were suspended for a time when a staff member was ordered by masked men to take a package to Strand Road Police Station and his van was set alight after he fled.

The development is being welcomed by local councillor Kevin Campbell.