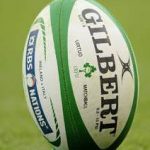 Ireland remain on course to retain their Six Nations title, and possibly even the Grand Slam.

They've beaten England by 19-points to 9 at the Aviva Stadium, and with it, inflict a first defeat of the championship on the Red Rose.

Robbie Henshaw got the game's only try, while Johnny Sexton kicked four penalties from five attempts before withdrawl with what looked like a hamstring strain.