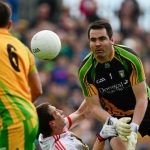 Donegal go into action tomorrow at Fr. Tierney Park in Ballyshannon where they take on Cork (Throw-in is at 2pm).

Donegal will be hoping to bounce back from their defeat to Dublin but their opponents have notched up two wins in their opening two games.

There are no changes in the Donegal team.

A close game is expected and as Rory Gallagher, the Donegal manager, told Tom Comack, Donegal will have to be at their best if they are to secure a win.