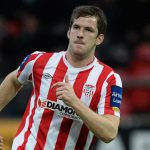 The Derry City v Finn Harps pre-season friendly at the Brandywell was abandoned today due to bad weather.

Harps led 1-0 at the break thanks to a first minute goal from on-loan striker Ruairi Keating who converted a spot kick after he had been taken down inside the box.

The referee decided at the interval that, with incessant rain, the pitch had become unplayable.

Next week the league starts.