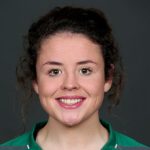 Larissa Muldoon scored Ireland's only try as the girls in green beat the World Champions England in the Women's Six Nation in Ashboure on Friday night.

The visitors lead at the break 8-3 before scrum half Muldoon went over the line to tie the game.

It's the second successive year that the Ballybofey girl scored against England in competition.

The winning score came from the boot of Niamh Briggs late in the game.

Fahan's Nora Stapleton also played a crucial role at out half.

After the defeat to France the victory puts Ireland's Six Nations hopes back on track.