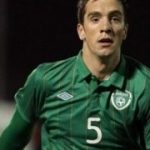 Derry's Shane Duffy will miss the remainder of the 2014-15 season for Blackburn Rovers.

The Republic of Ireland international, who joined Rovers from Everton back in August, has undergone a knee operation which rules him out for the rest of the campaign.

"It is devastating news both for the lad and the club," said boss Gary Bowyer.

"He is an important member of the squad and it will be a big blow for him to miss important league and cup games."

The defender said: "The operation went well this morning on my knee, I'm gutted to miss the rest of the season but will come back stronger, I've been through worse.

"Let's hope the lads have a strong finish to the season now and a big upset in the cup."

December 1, 2021
Fine Gael TD Joe McHugh is backing calls for the scrapping of the sliding scale saying it doesn't make sense. On today's Nine til Noon...