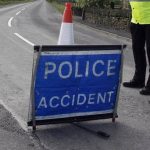 Police investigating a fatal crash outside Derry on Sunday last are renewing their appeal for witnesses.

Thirteen year old Georgia Doherty from Redcastle in Donegal died after two cars collided on the Glenshane Road, Drumahoe at around 5pm.

This afternoon, the PSNI's Collision Investigation Unit said they appreciate all of the information we have received to date, but are making a fresh appeal to any witnesses who haven't yet spoken to police to get in touch.

They are particularly keen to hear from the occupants of a silver Peugeot, bearing L plates, that stopped in the city-bound lane shortly after the collision.

They also believe that a nurse, or other medical professional wearing a green hospital-type uniform, may also have stopped and assisted at the scene.

Police would also like to speak to anyone who saw either of the vehicles involved, a white Vauxhall Insignia and navy Ford Focus with an 01 DL registration, in the minutes before the collision.

Witnesses are asked to contact investigators at the Collision Investigation Unit at Maydown police station.