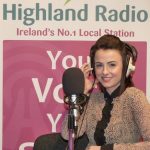 Lisa McHugh has already proven herself on stage as a polished performer and on the small screen through her TV show. Now Lisa gets behind the decks for a week long daily radio show on Ireland’s most listened radio station.

Next week, Highland Radio opens it airways to the Glaswegian beauty as she becomes a country DJ for a week. Lisa replaces Gary Gamble on the prime time 1.30 – 3.30 slot each day.

Lisa’s show will include a blend of Irish and American country music along with loads of chat, competitions and requests.

Lisa is not only the “Female Vocalist of the Year” in Ireland, but she has also been commissioned by Irish TV for her charm and witty personality, which she has used in abundance to become one of the channel’s newest TV presenters. Her show, “On the Road with Lisa” has recently begun filming for its second series, due to the popularity of the first season last summer.

Lisa on the radio is part of Highland Radio’s 25th anniversary celebrations. The station first broadcast on the 15th March 1990.

The show starts on Monday 2nd March at 1.30pm. If you are not in the Donegal area you can catch Lisa on line at www.highlandradio.com