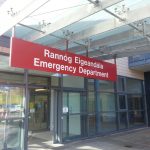 A Ballybofey man, whose father is seriously ill in Letterkenny General Hospital, says staff there are at breaking point.

Earlier this week the overcrowding crisis at the hospital reached record levels with 40 patients awaiting admission to beds on Tuesday.

Its understood that some patients had to be moved to Sligo because of a lack of beds.

Alan Mc Menamin's father has been in hospital since Monday, and he says he was left shocked by what he has seen this week in the emergency department.............