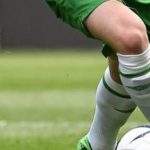 Paul Osams Rep of Ireland u18 home based side played out a 1-1 draw with Wales in Port Talbot on Tuesday.

It was the second game with the Welsh in two days, the first on Monday evening ended in a 1-0 victory with Letterkenny's Gareth Doherty scoring the goal form the penalty spot.

Finn harps Lee McCarron started in goals in the drawn game, Dara O'Baoill also started and captained the Irish side while Adrian Delap came on as a sub.

Delap, O'Baoill and Jason McGee all played in Monday's game.