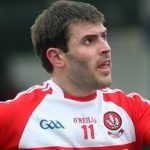 Mark Lynch will not be available for Derry's Division 1 trip to Tyrone on Saturday night.

Attempts to get the red card he sustained against Kerry overturned have failed this week with Croke Park's Central Hearings Committee upholding Lynch's dismissal.

Derry will also be without Gerard O'Kane who has opted out of the panel due to work commitments.

The experienced defender is expected to return in the coming weeks.