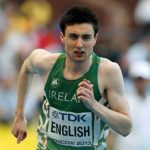 Competing in his first race of the season at the Indoor Grand Prix in Birmingham last Saturday, the 21 year old Letterkenny man ran 1.47.17 for sixth place inside the standard (1.48.50). His time currently ranks him fourth in Europe.

Mark who will also run in the 4 x 400m relay will be joined by Declan Murray of Clonliffe Harriers AC who secured his first major International Cap last year at the European Athletics Championships in Zurich.

Ireland will have two representatives in the Men’s 1500m with both Danny Mooney of Letterkenny AC and John Travers of Donore Harriers AC hitting the needed standard.

Mooney will compete in his first major Senior International and is ranked the quicker over the distance with 3:42.69.

Letterkenny’s Teresa Mc Daid will be the Operations Manager for the European’s.

Tori Pena of Finn Valley AC achieved the standard but she has chosen not to compete as she is focusing on her outdoor season.

High Performance Director Kevin Ankrom said: “Mark English, while still only 21, demonstrated that he is a championship competitor following his performance in Zurich and he will line up at this championships with a real medal opportunity. Overall this is a young team who will gain valuable championships experience and we will be looking for them to perform close to their best.