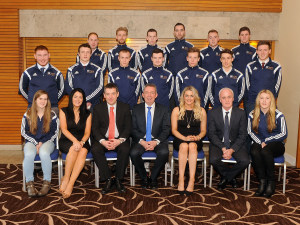 The award of sports scholarships took place on Monday 23 February at a lunchtime presentation in the Radisson Blu Hotel.

Sports Scholarships were awarded to the following students of the institute.

John Kelly, Athletics, Shot Putt, from St Johnston, John is a national champion in the event.

Simon Archer, Athletics, High Jump, U23 indoor champion and a silver medalist in the national senior High Jump this year and is a native of Templemore, Co Tipperary.

Rugby; Danny Gallagher, Letterkenny, who has played at scrum half for the institute.

Jordan Toland , Ramelton, (Soccer) a Swilly Rovers player, Cathal McDaid, (Soccer) Letterkenny, who is a Finn Harps U19 player , Peter Doherty, (Soccer) Clonmany a player with Cockhill Celtic and who has recently been selected for the Irish Colleges representative team this year.

Darragh Gallagher, Glenties, GAA team captain, in Letterkenny IT, Anthony Browne from Drumkeen, (GAA), a half forward and a former member of Donegal U21 panel, Daire McDaid, (GAA), from Termon who is a skilled dual player in soccer and GAA, Brian Howley, (GAA), Breaffy, Co Mayo, a member of the Mayo club and a most influential player for the institute. Thomas Kerr, (GAA), who hails from Ballybay, Co . Monaghan, and was a member of the Monaghan GAA Senior panel in 2014.

The awards were presented by Paul Hannigan, President, Letterkenny IT who commended the students on their achievements and also paid tribute to the efforts of the staff and coaches who assisted in the development of sports in the institute.