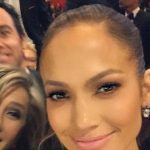 The couple, who have been dating since 2012, jumped into the shot while the 45-year-old singer was taking a photograph of herself at the Hollywood event held at the Dolby Theatre.

However, the 'Back-Up Plan' star wasn't bothered that the loved-up pair had crept into her photo and shared the hilarious image, which shows all three of them grinning, on her Instagram account.

She accompanied the picture with the caption: ''Photo bombed by my favorite couple Jennifer and Justin #Oscars (sic).''

Meanwhile, Jennifer and Justin weren't the only stars the 'I Luh Yah Papi' hitmaker had a photograph with during the festivities.

The brunette beauty also cuddled to Meryl Streep, Kevin Hart and Beyonce as she documented the shenanigans online.

Jennifer looked beautiful in a nude princess dress, which was complete with a daring plunging neckline and a large train, but she was left red faced when she tripped on her gown when she presented the Best Costume Award to 'The Grand Budapest Hotel's Milena Canonero alongside Chris Pine.

However, the 'Star Trek' actor managed to save the stunning singer from falling flat on her face as he caught her just in time.