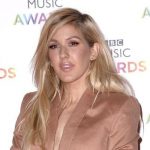 Ellie Goulding had to use some nimble footwork to narrowly avoid being punched in the face.

The 'Starry Eyed' hitmaker nearly ended up with starry eyes when she was out running this morning and a guy who she claimed was ''off his face'' attempted to smack her with a ''Superman punch'' - which involves feigning a leg kick to generate more power - but fortunately the 28-year-old star used her athletic figure to dodge his fist.

She wrote on Twitter: ''This old guy off his face literally tried to superman punch me on my run earlier it's a good thing I'm a brick did an impressive dodge (sic)''

Ellie - who is dating McBusted's Dougie Poynter - later admitted she was considering retaliating but decided against it because she didn't actually know what the guy's problem was.

She tweeted: ''I couldn't take him out because I didn't really know what his deal was (sic)''

The blonde beauty - who announced earlier this month she is running the Nike Women's 10km race in London on June 21 - decided to go out running in an attempt to stop feeling jetlagged.

She wrote: ''Time to train and go studio can't use ''I'm jetlagged and can't move'' excuse any longer for doing absolutely nothing (sic)''