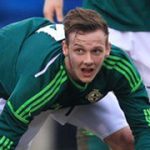 Derry are scheduled to play neighbours Finn Harps in another friendly this Saturday before the league starts on Friday 6th March away to Galway.

Meanwhile Derry have announced the signing of former Linfield midfielder Seanan Clucas until the end of July with an option of extending his stay at the Brandywell after that time.

Seanan’s former clubs include Preston North End and Bristol Rovers where he played with former Candystripe Mark McChrystal. He has also played at International level for N.Ireland at U21 Level.