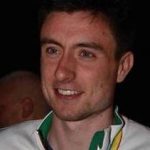 Mark English has won the National 800m Indoor Title with victory this
afternoon in Athlone.

The Letterkenny man cut loose with 150m to go to come home in 1min 51sec
to take the win ahead of Declan Murray.

It's been a good weekend for Mark who on Saturday secured European
Indoor qualification finishing 6th in Birmingham in 1.47.17

Mary Mcloone won another National Title as she took victory in the
Triple Jump with 12.10m jump.

Finn Valley's John Kelly set a new Donegal record on course to taking
silver in the Shot Putt with a 15.97m throw.

Elsewhere over the weekend, Conor Mahon took bronze in the triple jump
and Brendan Boyce was 2nd in the 3k walk.