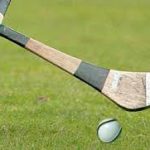 Donegal lost to Armagh 1-18 to 2-10 in Division 2b of the National
Hurling League this afternoon at the Athletic Grounds.

Brian Lafferty scored Donegal's goal in the first half to trail the
hosts 0-10 to 1-4 at the break.

Lee Henderson hit Donegal's second goal and scored seven points but it
couldn't halt the Armagh charge as the Orchard County won in the end by
five points.

Donegal are still without a win in the league so far this season.