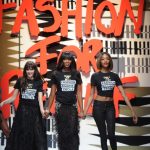 Justin Bieber was meant to walk the catwalk for Naomi Campbell’s charity fashion show in New York – but pulled out at the last minute due to nerves.

The 20-year-old pop idol and Calvin Klein model, who is used to performing in front of millions of screaming fans, was due to take part in the Fashion For Relief show to raise money for Ebola aid.

But Naomi revealed to Radio One that Justin changed his mind after arriving at the Lincoln Centre on Saturday night.
The supermodel revealed: “He was going to walk and then he got nervous. He just felt like he wanted to watch, but I thanked him for his support.”

Naomi, 44, was pictured holding hands with the Calvin Klein model backstage, but laughed off speculation she and Justin were dating.

She said: “I always get nervous, it’s just the way. You never know what can happen on a live show.”

Naomi repeated her Fashion For Relief show in London last night, with British celebs including The Duchess of York, Jourdan Dunn, Pixie Lott, and Rupert Everett joining her on the catwalk.
Some of the world’s best known fashion houses, including Dolce & Gabbana, Stella McCartney, and Vivienne Westwood, donated items for the show.
Brit Award nominee Ella Eyre performed her single Gravity to a packed crowd, who also took part in an auction of luxury goods.

Lots included an exclusive holiday to the Maldives, a Bvlgari watch and an Alexander McQueen dress.

All funds raised on the night will go to raise vital funds and awareness towards the fight against Ebola.
Naomi said: “Tonight has been incredible and I am so thankful to everyone who has been involved to make the show such a brilliant success. The fight to raise awareness and bring aid to those affected by Ebola is a cause that I am so passionate about.

“I sincerely hope the funds raised from tonight’s show will hopefully make a difference to those affected by this terrible disease.”