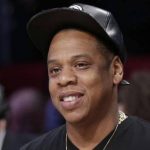 A man has filed legal documents claiming he is Jay Z's son.

Rymir Satterthwaite claims his mother hooked up with the rap mogul - who has a three-year-old daughter, Blue Ivy, with wife Beyonce - in the early 90s but he has been unable to prove the '99 Problems' sing is his father because he has blocked his efforts to do so.

According to a civil lawsuit, written by 21-year-old Rymir's legal guardian Lillie Coley, Jay submitted fraudulent information to the court to deliberately quash the paternity claim, which is believed to be a fake address.

Speaking of the five-year legal battle, Lillie told the New York Daily News newspaper: "Right now I can't talk to you about it. We plan to talk to the public soon.

"All this attention caught us off guard. We didn't expect someone to leak it to the press. We weren't expecting this."

Court papers show Wanda Satterthwaite first named Jay - whose real name is Shawn Carter - as her son's possible father after Robert Graves, who was believed the be the aspiring rapper's dad since birth, undertook a DNA test which showed he had no biological connection to Rymir.

Wanda made a bid to have Jay submit to a DNA test but he won a court battle by arguing there was no "extraordinary cause" involved.

In 2011, it was reported he had fathered a child with Trinidadian model Shenelle Scott but the claims were dismissed as "ridiculous rumours."