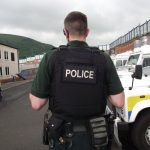 There are now two security alerts underway in Derry.

Within the past hour, the PSNI said a suspicious object had been found in Jeffrey Avenue in the Waterside, and an Army Technical Officer has been tasked to examine it.

Members of the public should avoid the area of Jeffrey Avenue and Harkness Gardens.

Earlier, police closed some roads around Trafalgar Court and evacuated up to 20 homes after a suspicious object was found in the front garden of a house.