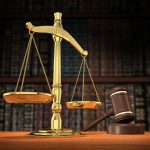 A Judge has ruled that a Derry man accused of having a grenade and being trained in weapons and explosives in Syria is to be released on bail.

25 year old Eamon Bradley, of Melmore Gardens, was arrested in November amid claims he took part in battles against IS and President Bashar al-Assad's regime.

Defence lawyers described him as a "dreamer" who posed no public danger.

As part of his bail conditions, he must live with his grandmother and cannot use the internet or mobile phones.