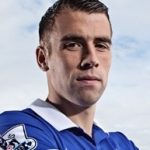 Everton fought-back from a goal down to effectively book their place in the last-16 of the Europa League tonight.

A hat-trick from Romelu Lukaku and another goal by Seamus Coleman helped Roberto Martinez's side to a 4-1 win over Young Boys of Bern in the first-leg of their clash in Switzerland.

A Steven Naismith's delivery across the face of goal which nutmegged the keeper was turned in at the far post by Coleman to put the Toffee's 2-1 up on 28 minutes.

That goal was the Killybegs man's first goal since the 3-0 win over Aston Villa in October.