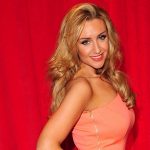 Coronation Street star Catherine Tyldesley has revealed she got very emotional when she read her exit storyline.

The actress’ character Eva Price is set to leave Weatherfield – and boyfriend Jason Grimshaw (Ryan Thomas) – while in real life, the 31-year-old is taking maternity leave to have her first baby.

“I got upset reading the script, because as a viewer, I think they’re one of the few Corrie couples that stand a chance of a happy ending!” she told Radio Times. “Jason will be like a bear with a sore head without Eva. They’re so right for each other.

“In some of the final scenes between Jason and Eva, Jonathan Harvey’s writing had me in bits. It was very emotional,” the actress said. “It was also sad for me because I won’t be working with Ryan for a while – I’m going to miss him a lot!”

The couple’s romance is headed for the rocks after Jason jumps to the wrong conclusion that Eva is having an affair with his dad Tony (Terence Maynard) – the seeds of which were sown by Jason’s brother Todd (Bruno Langley).

"Eva is utterly shocked and disgusted with Jason’s behaviour. She wants to spend the rest of her life with Jason. The way he reacts and the fact he didn’t trust her has broken her heart,” Catherine explained.

“Once Jason knows the truth, he panics. He loves Eva just as much as she loves him and he knows he’s messed up on a huge scale. He’s scared he’ll lose her now. And yet nobody has any idea that Todd is hugely responsible for the mess.”

Jason books tickets to New York to win back Eva, but she turns him down and decides to visit her gran Gloria in France instead.

Catherine admitted her pregnancy may have made her more emotional than usual.