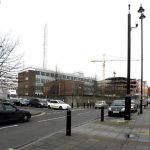 Solicitors acting for the family of a leading Strabane dissident republican who was found dead in Strand Road PSNI station have welcomed an adjournment in the inquest into the case and called for it to be held in the North West.

40 year old John Brady, was found dead at Strand Road PSNI Station in Derry on Saturday October 3rd, 2009. Within hours of his death, the family were told that intelligence officers had approached him in custody in an effort to get him to become an informer.

Welcoming the adjournment of the Inquest which was due to begin yesterday, the Brady family said they will not participate in a process which falls short of what it required.

They are demanding a thorough inquest involving the family which must look at what happened and whether there were any individual or systemic failures that contributed to or caused John's death. The starting point, they say, is an Inquest conducted at a Courthouse near to where John lived, died and is buried.

At the time of his death John Brady was on a prisoner work out scheme in the community, and his family say the circumstances surrounding what they call an unfounded allegation of assault being made against him the evening before his death must be fully explored by the Inquest.

They also want to know what exactly went on between him and police on Friday October 2nd 2009 and before.