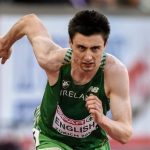 The championships will also act as the final chance for athletes to achieve the qualification standard for the European Indoors in Prague (6th- 8th March).

After his marvellous bronze medal in Zurich last summer English will be in a confident mood of making his mark at the European Indoors.

English will tackle the Sainsbury’s Indoor Grand Prix on Saturday, 21st of February in search of the 800m qualifying standard (1.48.50) for Prague.

He will then return to Athlone to contest the GloHealth national 800m indoor final on Sunday.