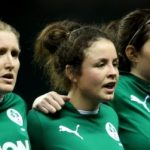 The Ireland Women were edged out 10-5 by France in a titanic tussle at Ashbourne RFC which was delayed by a series of floodlight failures.

A problem with the power generator at Milltown House was eventually resolved and following a scoreless first half the points eventually came on the scoreboard.

Once again Donegal's Larissa Muldoon and Nora Stapleton started at scrum and fly half while Moville's Katie Norris was an unused replacement.

During a frantic conclusion, Ireland displayed their never-say-die attitude in abundance, but Stapleton, Katie Fitzhenry and Alison Miller were all hauled down short of the line and despite their best endeavours, the girls in green could not avoid an agonising home defeat.

Thats now one victory and one defeat for the Ireland's women in the Six Nations.