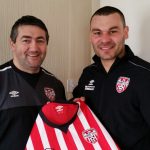 The 32 year old striker has signed until the end of July with an option of extending his stay at the Brandywell after that time.

Anthony spoke after signing “I’m over the moon to have signed. Things went pretty quickly, but once I’d known there was interest from Derry City it was a no brainer. I know the league well from being at Cork City and Sligo Rovers and it’ll be great to get back to full time football again. Every football aspires to be full time and I’m no different. I know there’ll be pressure, but it’s positive pressure and if we hit the ground running it’ll get us prepared to push on and push for Europe this season again.”

Manager Peter Hutton was equally as delighted to have got his man. “We were looking for a striker with a bit of experience. We have a lot of younger players that will learn off him, and as well as that it gives us something different up front to work with and a bit more of a physical presence which is great to have that option.”