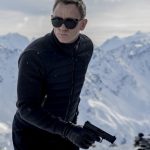 Daniel Craig looks ready for action in the first image of the star in forthcoming Bond film Spectre.

The actor wears sunglasses and is dressed in black as he holds his gun, against a mountainous backdrop in Austria.

A behind-the-scenes video from the first day of shooting the new 007 movie, directed by Sam Mendes, has also been released.

It shows the cast and crew filming “one of the major action sequences of the movie… a jewel in the crown”.
Production designer Dennis Cassner said: “The thing that Sam and I talked about was how are we going to top Skyfall? It’s going to be Spectre.”

He added: “So far it’s a good start. I think we’re going to continue the history of the Bond films in making things which are exciting for the audience to look at, and what could be more exciting than to be on top of the world?”

Craig’s co-star Dave Bautista, who plays henchman Mr Hinx, said: “I grew up in the inner city. It’s my first time ever on a mountain”, while actress Lea Seydoux, who plays Bond girl Madeleine Swann, added: “I’m quite nervous at the moment but and really excited about starting the film.”
According to film bosses, Bond will be sent on a trail to uncover a sinister organisation following a cryptic message from his past.

“While M battles political forces to keep the secret service alive, Bond peels back the layers of deceit to reveal the terrible truth behind Spectre,” they said.