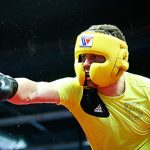 Jason Quigley's next opponent has been announced

The Finn Valley man will fight Lanny Dardar in his fourth professional fight at the start of next month in Los Angeles.

Quigley goes into the fight with a 3-0 pro record while Dardar who is a 27th year old from Louisiana has a record of 2 wins 2 draws and 2 defeats.

The fight will take place at The Belasco Theartre on Friday 6th March and is part of a new series in Los Angeles “LA Fight Club".

Jason has been in LA since early January preparing for the year which is expected to see him involved in alot of fights.