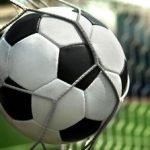 Ronan Curtis got the scoring underway in the 19th minute while Steven Mills and Rory Holden added second half goals for the 2012 champions as they ran out easy winners.

It could have been more if the Candystrips didn't miss a 65th minute penalty.

This Sunday defending champions Cockhill Celtic host Swilly Rovers while Bonagee United and Letterkenny Rovers will battle it out in a derby clash at Dry Arch Park.