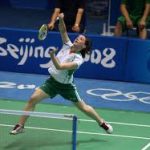 Double Olympians Chloe Magee and Scott Evans will lead the Irish team at the European Mixed Team Championships in Belgium.

The Championships pits the top 12 teams against each other for the title of best in Europe.

Ireland face host nation Belgium in their opening game of the tournament on Wednesday and then England on Thursday.

The team secured their place after beating Norway, Slovakia and Bulgaria in the qualification stages of group 6 held in Baldoyle, Dublin last November.

Raphoe’s Magee has had a successful year and reached the quarter finals of the French Super Series and the last 16 of the All England Premier Super Series.

Magee and Evans will be joined by brothers Sam and Joshua Magee, Chloe’s niece Rachael Darragh and Sara Boyle.