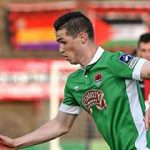 Derry City take on the Northern Ireland Junior International side in a pre season friendly tonight.

Letterkenny's Cillian Morrison is expected to make his first appearance of the year at the Brandywell this evening.

He hasn't played in any of Derry's games so far due to a bout of mumps.

The forward moved from Cork City to Derry at the end of last year.